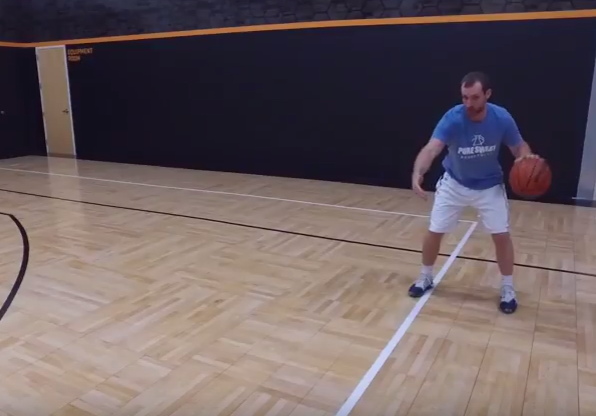 In case you haven't heard, we're thrilled to be partnered with Pure Sweat Basketball to create first-class basketball drills to utilize on our Dr. Dish shooting machines. With our technology and equipment at Dr. Dish, and Pure Sweat Basketball's expertise within player and skill development, we look forward to continually creating helpful resources for basketball coaches, trainers, and players.

In this video, Founder and CEO of Pure Sweat Basketball, Drew Hanlen goes through a great progression of 3 scoring options when the defense blitzes a ball screen. Blitzing/hedging a ball screen is a common defensive scheme designed to blow up the pick and roll and rattle the ball handler. With these 3 options, the ball handler can attack the hedge and put themselves in an advantageous position.

Rejecting the ball screen is Option #1 because the helpside defense is not set up ideally to defend that action. Oftentimes when the ball screen is set, the on-ball defender will try and anticipate and jump through the screen early. If this happens, Drew demonstrates a great way to reject the screen and attack downhilll on the opposite side. As the defender slips above the screen, the ball handler needs to stay patient, allow the defender to keep going, and then use a quick pop back dribble to create space. From there, there should be a wide open lane for the ball handler to get downhill and attack for a pull-up or make a play in the lane.

If the primary defender forces the ball handler into the screen AND the hedging defender stays connected to the screener, the ball handler can perform a "top-pop" as Drew calls it. That's where the handler pound dribbles and floats around the hedging defender. From there, the handler opens up their hips towards the basket and once again attacks downhill. As Drew states, the most common shot is a jumper around the nail area. But you always have to read the defense and specifically the help defender that is stunting. If he over commits, it's an easy pitch to a wide open shooter on the wing. If he continues to stunt, the nail jumper should be an open shot.

As you can see, these are all great actions to utilize in a game if the defense is aggressive in trying to trap the ball screen. All of these can be worked on through basketball drills and Dr. Dish can help you get more reps up than ever while also tracking the analytics from each location.

Looking for more Dr. Dish basketball drills? Click below and check them out!