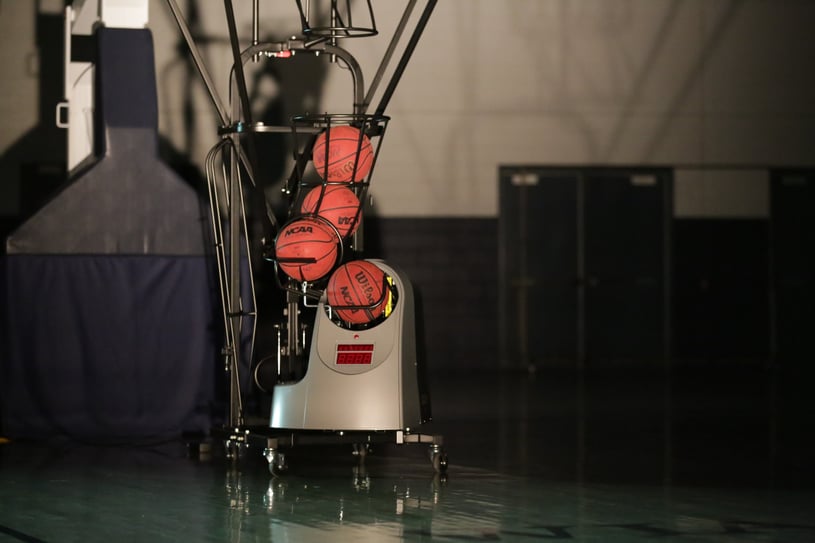 As a basketball shooting machine company, it's tough to write about what is wrong with our own products!

But, the truth is that there are some limitations that most types of shooting machines have. And even more importantly, there are many coaches and programs that aren't sure how to properly use basketball shooting machines to maximize their effectiveness.

Problem: No Goal, No Purpose

This is one of the most common issues we run into when talking with coaches about how they use their machines. Many just "encourage" their players to use the machine. However, there's no purpose behind using machine and no specific plan on how to get better through the increased reps you can get with a shooting machine. It's very difficult to motivate a player to work hard on a shooting machine if there aren't any specific basketball shooting drills for him/her to use and no way to track progress.

With our Dr. Dish shooting machines, we've incorporated goal setting directly into the machine. Instead of saying, "Get shots up on the shooting machine," you can tell your player to "Run drill #37." Drill #37 could be a pre-programmed drill where a player is required to make 200 shots total from 7 spots around the perimeter. You can then track progress and motivate them to hit those 200 shots in as little attempts as possible. With our LCD smartscreen, the player/coach can also track how the player is shooting at specific locations. The goals are programmable by total attempts, makes, and by time.

After the workout, with the coaches dashboard, you can track progress of Drill #37 (or any drill) over time. For example, the first time a player did the drill they may have taken 500 shots to make 200. The second time may have only taken them 450...and so on. What better way to motivate players than by giving them a goal to hit and keeping them accountable?

Personally, this is my biggest pet peeve with shooting in general: casual shooting. But especially if you want to utilize a shooting machine, you want to make sure you're getting up game-like shots at game speed. I've been guilty of this myself and have seen numerous players set up a machine, put the tempo up so there is a ton of time between passes, only pass the ball to one spot, and just lazily get up repetitions. This can actually make you into a WORSE shooter as you can start developing bad habits.

One of my favorite quotes regarding this comes from Jeff Hornacek: "Shooting 100 game speed shots is more valuable than 500 lazy shots. Lazy shooting is a waste of time."

This problem is partially addressed with the goal setting and accountablilty piece above. When players have a goal and are pushed to hit a certain number of shots, they will be much less likely to shoot around casually on their shooting machine.

However, we at Dr. Dish Basketball wanted to take this to the next level. That's why we provide a free Heart Rate tracker with every Dr. Dish Pro and All-Star we sell. With the Heart Rate tracker synced directly to the Dr. Dish machine, you can see whether or not your players are shooting at game speed. Let's be honest, hitting 400/500 shots is great but if it's not done at game speed, is it really that relevant?

My favorite feature is programming the machine to move faster and faster until the player's heart rate is at game speed (70-80% of their max Heart Rate). The machine doesn't have a conscious and won't slow down just because a player doesn't feel like pushing themselves. Again, all of this data can be uploaded to the coaches dashboard for accountability and progress tracking.

This has been problem with most shooting machines for years. Of course the massively increased reps that shooting machines provide are undeniably valuable. But how game-like are the passes from directly under the hoop? How often does a player get the ball under the hoop and kick it out for a 3 pointer? It happens at times, but wouldn't you want to get up shots from game-like passes to train like you're in the game? If only there was a way to pull the machine away from the hoop and pass like an actual player on the perimeter...

This ties into the last problem very closely. But with standard shooting machines, it's next to impossible to train your inside game with a big net in front of the hoop. So most shooting machines eliminate post training and are only for mid to long range shooting. Also, what if your guards are having trouble finishing? Wouldn't it be nice to have a shooting machine designed to deliver passes for your guards to catch AND finish at the rim?

Again, this is why the Dr. Dish All-Star is the best basketball shooting machine in the world. Originally it was designed specifically for post training. Here's a great video on how to use it to improve your post game.

But there are so many different applications for the machine beyond just post training. You can literally simluate any offensive action you want and focus on guard finishing drills as well. We have a great series of game-like shooting drills with the Dr. Dish All-Star here!

So yes, most basketball shooting machines may not be perfect from their design to the correct application of them. We've recognized that at Dr. Dish and have done the best we can to innovate and promote the proper use of our machines. And we're not done innovating! No matter what shooting machine you have or planning to purchase, make sure you use it to replicate game-like conditions as much as possible.

Need basketball shooting drills? Check out these videos below to help you train like you're in the game!