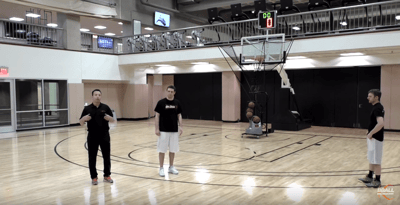 We were very fortunate to get back on the court with Coach Nick to demonstrate how to use the Dr. Dish Basketball Shooting Machine to work on the Flare Action and Screen.

It's important to note how many more repetitions you can get as you practice these types of basketball shooting drills with a basketball shooting machine. This is a great action to work on both during the season and in the off-season to become completely comfortable with so that it's easy to execute in a game.

The Flare Action is a common play seen at all levels and can be very difficult to guard if run correctly. However, the timing, the screen, the pass, the footwork, and the shot are all details that must be perfected in order for it to be effective.

Check out how Coach Nick breaks down the play below:

The first key Coach Nick goes over is exploding from a stand-still position. Whether you set your cut up or not, it's important to be able to have some explosiveness to create separation from your defender when you start the flare cut. Coach Nick demonstrates how to go from standing straight up and down to an athletic stance in the quickest way possible. With this split-foot action players can now create separation from their defender much easier.

From there, the footwork is essential to understanding how to catch and shoot from a balanced position. This can be difficult to do with the Flare Cut because your momentum is actually taking you away from the hoop. If possible, doing a "hop" on the catch can actually help a player stay on balance and get ready to shoot all in one motion. The footwork is very similar to a "step-back" move off the dribble.

Coach Nick also adds in a "bonus" footwork session on shooting off of a down screen action. While he is big on promoting the "hop" he recognizes the need for the "1-2" footwork when moving to the right (assuming you're right handed). This is because you can have more control and less torque from your upper body. As you plant your left foot, you swing your right foot around to get squared-up and knock down the shot.

The pass may be the most important part of the flare action. Even if you have a great cut with great footwork, if the pass is not on target and at the right time it won't be effective.

As Coach Nick states, when throwing the flare pass, it's important to throw an over-the-head pass to get it over the defenders. However, you still want to put some pace on the pass so that it doesn't take a ton of time to get to the shooter and it doesn't allow the defender to recover. The next part is getting the timing and accuracy down. And the best way to ensure this is by practice, practice, practice. And the best way to get a bunch of game-like repetitions is through basketball shooting drills with a basketball shooting machine like Dr. Dish.

As Coach Nick says, "So there you have it sports fans..." The Flare Action should be an action that every team has in their offense. But use these keys to make sure it's as effective as possible. And most importantly, make sure you practice it consistently!

If you liked this breakdown, you need to check out the Hammer Shooting breakdown with Coach Nick: