How to Celebrate National Night Out with Dr. Dish

We know that many neighborhoods across the country are taking part in National Night Out in early August. National Night Out is a community-wide event designed to strengthen communities and promote relationships. If you're celebrating this year, we'd love to see basketball be included in your festivities!

One of the things we most enjoy at Dr. Dish Basketball is hearing the stories of our customers. With the Dr. Dish Home being a home-based product, we cherish the stories of families bonding around their shared love for the game of basketball.

Whether or not you want to get competitive, get your Dr. Dish iC3 Shot trainer or shooting machine out of storage and let the neighborhood give it a try. We're always pleasantly surprised how much non-hoopers enjoy playing with Dr. Dish.

And, don't forget Dr. Dish Home now has Multiplayer Mode! This allows for up to 3 players at a time to track their stats.

To help you celebrate this year, we hand-picked a few of our favorite family-friendly basketball games. These games are fun for a variety of ages and will provide some light-hearted competition with your family, friends and neighbors!

All of these games can be played with or without a Dr. Dish machine.

The goal of this mini game is to be the last player standing! Dribble KO helps players work on their ball-handling, coordination, protecting the ball, and change of pace.

a. Must maintain constant dribble in each round. If a player travels, double dribbles, picks up the basketball, or loses the ball out of bounds they are eliminated from the game.

b. Players compete by trying to knock their opponent's ball outside the boundary line to get them out. Can only use hands, NOT feet.

c. If a player gets out in any way, they put their ball away and then become a “sideline defender”. This sideline defender can try to knock active players' balls away from them but cannot cross the boundary line back into the game.

a. Depending on the amount of players (the more the better) create a boundary that gives players space to move around but also forces them to cross paths with other players.

b. After a few players get out and/or the timer goes off, decrease the playing area by creating a smaller boundary area. This makes the game more challenging and forces players to control the basketball better.

c. Once the game is down to 2-3 players remove the timer and its winner takes all inside the boundary line. If players try to avoid each other, decrease the boundary space even more.

a. Use a phone or any type of timer (30 sec or less) to move round to round. Again each round the boundaries become smaller as more players get out.

a. Protect the basketball: Try to keep a guard arm up at all times to keep opponents away and also use to tap other players balls out of bounds

b. Eyes up: Players will have to keep their eyes up to see opponents and also keep an eye on boundary lines.

c. Change of pace: Players must master a change of pace or speed to attack or get away from opponents. 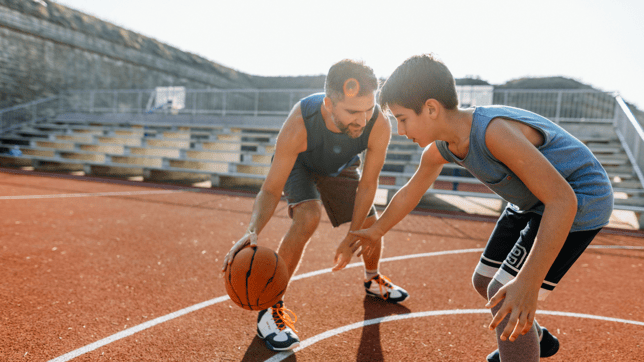 This mini game is fun and competitive for players of every skill level and age. Players will have to knock down shots under pressure in this fast paced game!

a. Everyone participating will get into one line at the free throw line. Younger players can start closer if need be.

c. Players get out of the game if the player behind them makes any attempted shots before they do.

d. After the basketball is handed off to the next person in line, the shooter (if still in the game) goes to the end of the line. Players that get out stand on the sideline and cheer the remaining players on.

The winner is the last person in the game. Remember the winner will always be the player that shoots behind the person in front of them and makes the shot before they do!

This is a really fun game that is a team or group mini game. The focus is to take shots you can make and try to score the most points for your group. Speed, shooting accuracy and excitement are what will drive the winners in this fun mini game!

a. To play you’ll need minimally 4 players split into two teams. If there are more players equally split up with no more than 3-4 players per team. Teams will start in lines, at the 3pt line and with one ball. Each player will go one at a time, per line. They’ll attempt one shot, rebound and then hand off to the next player in their group line. This repeats for 3 minutes total.

a. Each group will keep track of their team score adding points each time a basket is made. The team with the most points after 3 minutes wins.

b. Make sure to reiterate taking shots that are makeable rather than the deep shots worth more points. Younger players often make this mistake in this mini game.

All of these games are great way to get competitive while having fun and enjoying National Night Out. If you try any of them out be sure to tag us on social @drdishbball on Instagram, Twitter, TikTok, and/or Facebook for a chance to be featured!
Topics:National Night Out