The final buzzer sounds off, and you were just beaten handedly by your rival school. You shake hands with the opposing team and awkwardly smile at the rival coach and congratulate him on their win. As you’re walking off the court you think over and over… 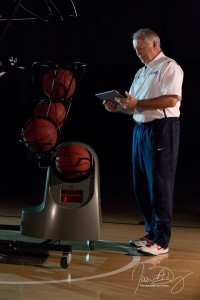 “We should have won that game.”

After giving a long post-game chat with your players, you head to the film room to figure out what on earth happened. You watch the film and dissect every play until 2 am with your assistant coach and come down to the same conclusion over and over…

“We just couldn’t hit our shots.”

The rapid rise of game-day analytics and 2am film sessions that coaches have today is mind boggling. With the advent of tools like Hudl and Krossover, coaches can get an unprecedented and in-depth look at their players game-day shooting stats.

However, there’s one glaring problem with this…. Only 4% of all shots for a program during a season are taken during a game. Where are the other 96% taken?

In practice... and very few coaches are keeping tabs or are placing any value on these shots.

Keeping a good count on game day stats is important, but getting the other 96% of the story with will not only help your overall strategies but give you a huge leg up on the competition.

There’s plenty of ways to keep track of practice shooting stats. But let’s be honest, it’s a huge hassle to incorporate that in your basketball practice plan.

There’s an easier way to track these practice stats, and that’s with the new Dr. Dish Smart Series. With the company’s new mobile app, you can instantly upload shooting stats to the Coaches Dashboard cloud database. These insights will allow for you to not only look at overall shooting percentage but go to in-depth stats on how a single player shoots at specific areas on the court.

So get ahead of the training curve, and track the other 96% of shots!

If you liked this post, you'll definitely want to check out this blog: