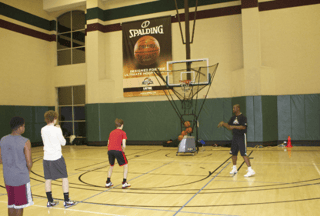 The term ‘Old School’ is great in many ways when it comes to basketball training. Many old school tactics and strategies are still effectively used in today's game. However, why train your shot the 'Old School' way when new age technology allows you to do so much more?

Athletes are training smarter with cutting-edge technology and it shows in their shooting skills. Even the best old-time teams, like the Boston Celtics of the 1950s and 1960s, shot about 40 percent from the field. In 2015, that kind of shooting percentage sends players to the bench.

Before the rise of the machines, players wasted most of their time chasing down rebounds when they worked on their shot. If they were lucky, teammates rebounded for them. But, that meant the non-shooting players got less work while shooters lost concentration waiting for the balls to be passed back. Those passes often caught the shooters out of sync. Because let's face it - no one wants to rebound for a shooter!

Don’t do that to your players. Be aware of the four major signs that your team is living in the basketball stone age and in need of help from a basketball shooting machine.

Quality basketball shooting machines address all four of these issues when used properly.

At the most basic level, missing most of your shots is a big tip-off that your players lack confidence in their shots. Instead of knowing their spots and working to get open, they may be shooting quickly to avoid defensive pressure. Machine-aided shooting practice clearly shows the best spots for each shooter and translates into high percentage shots in game situations.

It's difficult to get players to develop correct habits without high repetition training. With shooting machines there's no doubt your players will improve faster with machines that rebound at least 90% of shots and return precisely programmed passes. Less time wasted on chasing down loose balls leads to better concentration, rhythm, and confidence for your shooters.

Basketball shooting machines don’t do casual. No distracting behind-the-back, over-the-neck passes to the shooter from a bored rebounder. No, ‘Hold on, I need a drink of water.’ Your players are challenged the entire session. And, the better machines will offer a selection of apps that allow real-time shot analysis such as shots taken, time between shots and field goal percentage.

4. Repeatedly Running Out of Time During Practice

This is a coach’s nightmare. Practice time is precious. Conditioning, defense, playbook drills all take time away from basketball’s main focus – putting the ball in the basket. With the help of a shooting machine, you know exactly how much shooting practice your players are getting. You can plan practices to the minute and know your players are improving their shots in a limited amount of time.

An investment in a quality basketball shooting machine is an investment in your team’s future. The jump shot, the most fundamental weapon in basketball, is more deadly because of them. Shooting machines have created a generation of high-percentage shooters. The best players of yesterday would be shocked at today’s shooting efficiency.

So, if you notice any of these four signs that your team is shooting the ball ‘Old School,’ don’t be afraid to enlist some mechanical help. It’s the modern thing to do.

Do you agree that you need a shooting machine now? Then you need to ask these 5 questions before you buy!