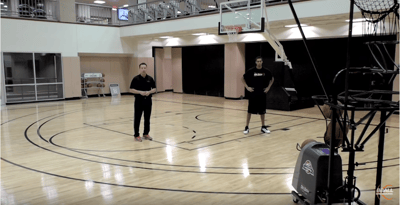 We've heard it plenty and I'm sure you have too..."In today's game, the post up game is dead!"

Sure, there's been more of an emphasis on outside shooting as the game has grown to value 3 pointers more than ever. But, can we really say that the post-up game is not important anymore?

Personally, I believe one of the main reasons the post-up game may be in decline is because of a lack of teaching the position through relevant basketball drills. Also, many post players are more worried about dunking than they are building their post up arsenal unfortunately!

We were fortunate to get back on the court with Coach Nick of BballBreakdown to go over simple but incredibly effective post-up secrets used by NBA players. Check out the video below featuring the Dr. Dish All Star:

Again, no matter what level you are playing or coaching at, these are very simple but extremely effective post-up concepts. The attention to detail with the footwork as well as the finishing is critical to making this move effective in a game-like situation.

One of the greatest, if not the greatest, post-up player's of all time, Hakeem Olajuwon, used "the hop" and "split-foot" a ton throughout his career. Among many things, it was one of the reasons he was so difficult to cover on the block. Here's a short snippet of Hakeem teaching the "split foot" concept to Dwight Howard:

As Hakeem mentions in the video, the defender is waiting for you to come down as you hop. But, with the split foot, you can already have the advantage on the defender without him realizing. By the time he/she attempts to recover, it's likely too late.

Use these simple post up tips to revamp the post game in your offense. Prove to the world that the post up game is not dead!

And don't forget, the Dr. Dish All Star is the ONLY basketball shooting machine designed for post training!

Like these basketball drills? Then you'll definitely like the Hammer Shooting video Coach Nick did with us too!