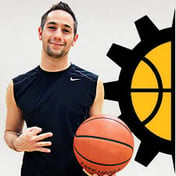 Coach Collin Castellaw of Shot Mechanics Basketball stopped by the DishLab to show how you can run drills that train you how shoot off the catch like Steph Curry.

Curry is great at shooting in transition off of passes that might be too for out in front or that he has to speed up to get to. In game-like situations, passes are rarely on target.  So Coach Collin used the Dr. Dish All-Star to simulate game-like passes in transition for situation where you're training by your self.

Check out the video below and keep reading for a breakdown of all three drills.

In this first drill, the Dish is set up past the three point line and your starting point is next to the Dish.

The Dish will make a pass across court to a spot of your choosing along the three point line. The pass is designed to bounce and be caught on the run. At that point, you pull up a pop into a jump shot.

The point of this drill is to help change the momentum of your shot. You shouldn't be catching up to the ball and leaning the same direction you were running. Once you get to the ball, quick stop, square up and let the shot fly. Make sure to move the Dish to the opposite side of the court to work on getting a feel for transition shooting on both sides of the floor

Shooting off of the Cut

In this drill, Collin works on shooting a 15ft jump shot off of a lateral movement, then shooting a flare off of a pin down screen.

The Dish sits at the 3 point line and once again, you start next to the Dish.  The Dish will make a pass to area around the free throw line as you run laterally to it.  Make sure to keep in mind that your lower body should be facing the basket, ready to shoot, before you catch the pass.

After you take your 15 ft jump shot, grab your rebound, kick it back to the Dish and make an out cut to area outside the paint by the block that is on the same side as the Dish. Once there plant hard, come back to the mid line, plant there and come back out to the corner for a flare.  This is to simulate setting your defender up for a pin down screen. Once in the corner, make sure your feet are getting set before the pass arrives, line up, and knock down the shot.

The two drills above work great as a combined drill as well. Continue the loop as many times as you need or until it wipes you out!

Being able to shoot quickly after catching a pass at the hip is important because it helps you do your footwork prep before catching the basketball, which makes your shooting motion much faster.

The Dish sits at the top of the key, beyond the three point line. As before, you will start next to the dish and run out to the free throw line extended area. The pass is designed to hit you in the hip, so make sure to not turn back to pass as its coming. Instead, your feet should be getting ready to shoot as soon as you catch the ball.

Once you take the shot, grab your rebound, pass it back to the Dish, and run to the same spot on the opposite site of the court. You can run through this drill for a set amount of time, or for a set number of repetitions. That part is up to you!

Looking to get a shooting machine? Click below and find out 5 ways to gain an edge with your Dr. Dish!