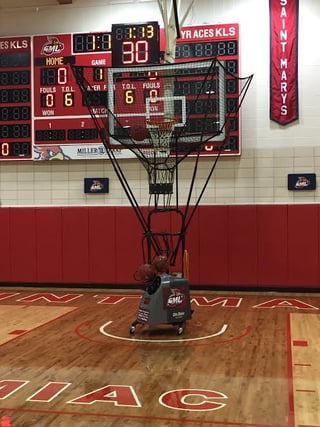 Coach Jamison Rusthoven has made many stops throughout his 20+ year coaching career and has experienced much success along the way (see his full bio here). Now entering his 4th season at St. Mary's University in Minnesota, he's determined to continue to pushing the program forward by improving skill development every year. We're honored to help him and the program along the way at Dr. Dish!

Here at Dr. Dish Basketball, we have emphasized the importance of training with game location passing for a while. After talking with Coach Rusthoven, we found that his team puts just as much emphasis on it as we do in their workouts:

"I can't stress enough the importance of practicing how you play. When one of my players comes in on his own and uses the Dish, I know that he has the ability to set it up from any position on the court and work on shooting off of good solid passes that are coming from somewhere other than directly under the basket. It's almost like having a coach that lives in the gym."

Coach Rusthoven's sentiments are similar to other coaches that we've heard before. For years, basketball shooting machines have only been able to sit under the basket, rebound makes and misses, and kick the ball back to shooters as they rotate around the perimeter. What we found is that because of the fact that this didn't replicate game-like scenarios, coaches were hesitant to take up valuable practice time with what essentially was a catch-and-shoot warmup drill. As a result, shooting machines were only getting used in off-season programs or open gym sessions.

This is exactly why we went to work designing the Dr. Dish All Star.  And coaches have been receptive to it, as you can see here with an example of how Saint Mary's Men's Basketball utilizes their Dr. Dish All-Star:

“This time of year we use it more as a typical rebounding and passing machine to develop our shooting efficiency, but since I am not allowed any basketball instruction time before the season begins or after the last game of the season is played (per NCAA DIII Rules) our guys love to use the All-Star because they can have as few as two guys working together on down screen reads and other parts of our offense without having to round up all their buddies.  They just set it the tempo they want, select the locations of the pass and get to work. The real benefit, though, is that they can get immediate and real time feedback as if they were in season”.

One benefit that Coach Rusthoven pointed out was the confidence level of his players has increased because of the increased time they've been able to focus on game-like scenarios all year long.

"You're not always going to be able to call a timeout to draw up the perfect play. You have to trust that your players will remember what they've been practicing and working. Since we started using the All Star, our guys have been able to design their own workouts to cover more game-like scenarios than in the past, giving me the ability, once the season starts, to cover more advanced details that we wouldn't have had time to cover before. It really is a game changer."

We would like to thank Coach Rusthoven for sitting down with us and sharing his story with us and we wish the Cardinals the best of luck this season! If you have your own story of how you utilize your Dr. Dish for game-like training we'd love to hear from you.

And if you're looking for inspiration on how to further incorporate your shooting machine into your practices, Coach Mason has been busy in the #DishLab creating drills you can try out. Just take a look at our Drill Video Library!