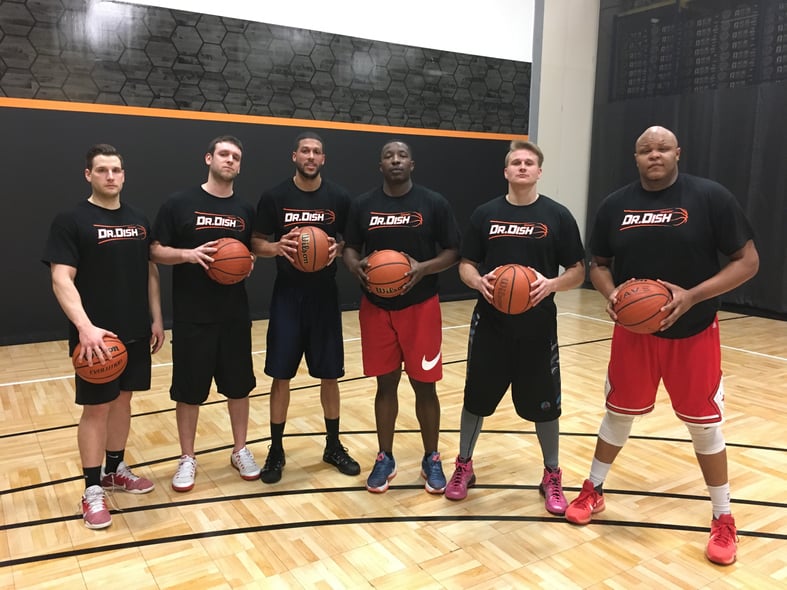 Dr. Dish Basketball was fortunate enough to have several former college and professional players come into the Dish Lab to put in some work. We were able to do several team shooting drills and also were able to get some competitive play in as well.

In one of our basketball shooting drills, we moved the Dr. Dish All-Star shooting machine away from the hoop and trained post and wing play at the same time! No other shooting machine in the world is designed to do this and that is why Dr. Dish is the most advanced training machine when it comes to game-like and game-scenario training!

The video below will break down each drill and focus on several different ways to help your team shoot better on the move and shoot better in game-like situations.

In the first shooting drill our focus was shooting on the move and contested closeout shooting. What makes this drill unique is that players are involved in the closeouts as well. The Dish will make the first pass to the left wing and the player recieving the pass will make a quick move past the defender attacking middle for the mid-range shot. After taking the initial shot,  the player then will closeout to the opposite wing where the Dish is making a pass to the next shooter for 3 point shot. The goal is not to block the shot but make it realistic in closing out so that the player feels the pressure of a defender coming. It's always best to try and incorporate different or even defensive actions during your basketball shooting drills as well!

In the second drill we turned it up a notch with intensity and also incorporated post play as well. For this drill we moved the shooting machine away from the basket and set it up on the right wing. We set the Dish to make alternating passes to the post area and also the free throw line area. We set the tempo at 4 which is a pretty fast pace to hold with 6 players in the drill.

To start the drill we had two post players down low that were taking turns scoring and defending in the post area. Each time the Dish passed the ball down low, the offensive player would make a quick move. Then the defender gets the rebound and passes it back to the Dish. We had two players starting at the top of the key to set the screen away action with a dive to the basket. The player screening will get the rebound and pass it back to the Dish. Lastly, we had two players starting on the opposite wing area ready to recieve a down screen for a mid range jump shot. The screener would become next shooter and shooter would become next screener.

These basketball drills are great for coaches and players that are trying to add something new and fresh into their practice regime. You can always make these drills competive as well with amount of shots made per player, group or team!

Once again, we at Dr. Dish Basketball wants to thank our special guests for coming in and putting in some major work. And as usual, always remember to train hard, train smart, and train with a purpose!