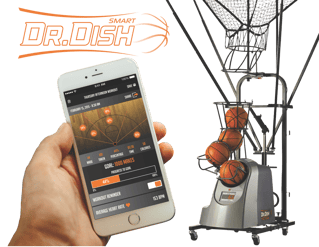 Dr. Dish Basketball is back at it again with another great Drill of the Week! We were fortunate enough to have Pro Player David Hicks come to the DishLab and work on some flare actions basketball drills with our All-Star Shooting Machine.

Coach Mason and David went through a sequence of situational looks and moves focusing on the initial flare action. One of the hardest screens to guard is the flare since there is so many options to score from it. The decision making process after the initial flare out is also crucial. The NBA's Golden State Warriors have really shown the basketball world how effective the flare screen action can be. It is especially effective when you have good shooters and players that can make the proper reads. Below Coach Mason will go over some options that any player can use.

Pro player David Hicks will start in the paint and sprint to the top of the key where the screen will be set. After that he will immediately flare out to the wing area in which the Dish will pass him the basketball. After David catches the basketball, he will attack towards the baseline, do a quick move and then finish at the rim. David also has the option to make a quick move then pull up for a jump shot or floater. If the defender chooses to go under the flare screen, the screener will adjust and then the offensive player can stop and shoot the open jumpshot. If the defender guards the screen properly and shadows the shooter, then the baseline attack would be an option. The quick move David does is simulating the next defender stepping over to help. Again, David can make a quick move past the defender or pull up for the jump shot or floater.

The next option is using the top screen and attacking the middle. The first read is the defender trailing you around the screen. As an offensive player you have the option to turn the corner, stop and pop, or hit the mid range jumper. The other reads would be attacking all the way to the rim or using a controlled floater. Its Important to make sure that you know where your defender is at all times so you can make the proper read. It's essential to make sure your teammates are on the same page as you. There will also be opportunities for them to score if you make the proper reads.

Flare Into Splitting the Top Screen

The last action is splitting the top screen. We are simulating a defender showing hard and trying to force the offensive player away from the basket. There are several things that are important to focus on when offensively splitting the screen. First, you have to come off hard to make the defender think you are trying to turn the corner. This will make the defender show out harder and faster. At this point its a quick change of direction through the gap with a protected quick move towards the hoop. Make sure to keep your dribble low and almost push the basketball through the gap. Chris Paul, Russell Westbrook and other similar players are awesome at doing this. After splitting the screen you have the scoring options of shooting, driving to the hoop or floater depending on the next line of defense.

Figuring out the correct reads and reacting accordingly will not only make you a better offensive player, but it will also open opportunities for your teammates to score. Great defensive teams will rotate and help teammates when mistakes are made and this is when you have an opportunity to make an easy play for your teammate. Using purposeful basketball drills is the best way to prepare for game-like actions.

Our All-Star Shooting Machine has the capability to make game location passes and will help train the flare action sequence. Here at Dr. Dish Basketball we train smart, train hard, and train with a purpose!

Make sure to ask these 5 Questions the next time you buy a basketball shooting machine!