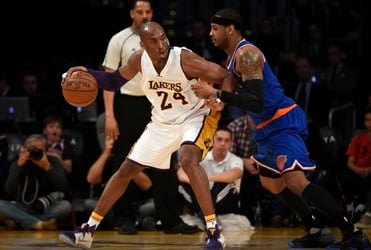 Coach Mason here with another great drill of the week! I'm really excited about this one because I had former college player Evan Mattson workout with me. We did a few challenging inside/outside basketball drills that really pushed us hard and I know these drills will challenge you as well!

I really wanted to focus on the inside/outside action because more and more players are becoming "positionless" as the game of basketball evolves. Traditionally tall players played down low and smaller players players outside of the paint. In 2016, we see players of all levels breaking traditional barriers and coaches pushing the limits on what their players are capable of. As a former college and professional player, I quickly learned how important it was to play multiple positions and to also be able to work the inside/outside game.

In this video we work on shooting, diving to the hoop, posting up, and dribble hand-offs. All in one drill! Check out the video below and challenge yourself to become a well rounded player!

The first inside/outside drill Evan and I did started with me in the post area using the Dirk Nowitzki one foot fade-away shot. I set my defender up with a quick hard dribble to freeze them into a step back shot. Now this step back shot is unique because I am not planting both my feet before I shoot. I'm fading on my back foot to help create more separation from my defender. This shot takes a ton of time to master, but is extremely effective when you become comfortable with it. Even though your lower body isn't necessarily square, make sure your shooting mechanics up top are so that you have a consistent shot every time. As soon as I shot my Nowitzki fade I hustled to the free throw line. My teammate Evan then grabbed the rebound and kicked it back to the Dish.

Diving to the Hoop

The next action in the drill starts with the Dish passing the ball to Evan in the post area. As soon as Evan receives the pass he is going to step out and make the pass to me diving to the hoop for a dunk or lay-up. This is great action to practice because post players often get double teamed and the other offensive players will find themselves standing around. I had many dunks in my career simply diving to the basket when a post player got the ball down low. It's great action to get the defense moving.

Down screen and Hand-off Shooting

The Dish will now make two passes at the same tempo to the free throw line area. I will receive the pass and Evan will simulate coming off a down screen from underneath the basket. Evan will catch and shoot the basketball as soon as he gets it. Next I will hustle to get the rebound and pass it back to the Dish and then hustle back to the free throw line and receive the last pass in the sequence. As soon as I get the pass, I will dribble hand-off to Evan for a mid-range jump shot. After that I'll rebound, pass the ball back to the Dish, and we will repeat the drill.

In the second inside/outside drill Evan started in the post area and received a pass there from the Dish. Evan then faced-up and shot a bank of the glass as I defended him. After the shot I grabbed the rebound and passed it back to the Dish. Evan mostly played guard in college, but this is another great example of adding more scoring options to your game. Evan is a tremendous shooter, so him facing me up and taking the quick shot off the glass was an easy way for him to get a quick shot off.

Face-up, Jab into Finish at Hoop

The next pass from the Dish was to me in the post area as well. I faced-up but instead of shooting I made a hard jab to the baseline and attacked middle to the rim. It's important to stay low the entire time and to sell the fake so that you get the necessary space needed. I finished with a dunk, but the floater and reverse lay-up also works great in this situation. After finishing at the rim I got my rebound and passed it back to the Dish. Evan then hustled to the free throw line to receive the next pass.

The last part of this sequence involves Evan receiving a pass at the free throw line and attacking off a ball screen that I will set after he receives the pass. After he shoots, Evan or I will grab the rebound and pass the ball back to the Dish. Next I will sprint to the free throw line to receive a pass and Evan will then set the ball screen and roll to the basket like I did before. It's very important to come off the ball screen shoulder to shoulder so that you get the separation needed to get  your shot off or to make a play. You can always pass to the player rolling to the basket and you have the option to use a step back as well.

The Dr. Dish All-Star is the only shooting machine in the world designed to make game-location passing. Evan and I set the Dish on tempo so we had to keep our pace and make sure we were at our spots at the right time. The ability to train inside and outside is essential to any basketball program so if your shooting machine isn't designed to do this, you need to upgrade as soon as possible!