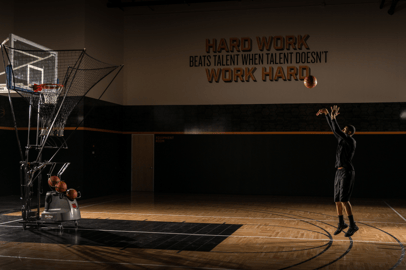 Dr. Dish Basketball and Thrive 3 Basketball are back at it again with another great drive and read drill. In these basketball drills, Pro Skills Trainer Mike Lee will focus on the middle drive and the different reads the offensive player will have to make. Coach Lee makes sure to point out that it's very important for players to imagine different defensive scenarios and to make the reads and plays accordingly. Each player involved needs to go hard every time to simulate game-like conditions.

It's crucial for players to understand spacing and timing on the court. It doesn't matter if this is in a set play or a free flowing motion offense. If a player's spacing and timing is off, the offense will struggle and scoring will be tough to come by. With the Dr. Dish All-Star shooting machine, we can program shooting goals within each drill. All of the drive reads in the video below are extremely valuable and something that coaches should incorporate into their practice regime. Check out the video below and see how these reads and concepts can benefit your offense.

In the first drill, the players focused on making the pocket pass from the middle drive. We had one player starting at the free throw line extended and another in the baseline/short corner area. The Dish will make the the pass to the player at the wing and that player will drive hard middle. As soon as they do that, the baseline player will space out to the corner and receive a pocket pass for the shot. The passer will then receive another pass from the Dish for a shot. Timing is crucial in this drill and equally as important when it's actually game time.

In the second drill, the players focused on the timing and spacing of the drill. The players once again started at the wing and baseline area. The Dish will make the first pass to the wing player and that player will drive hard to the basket and make a pocket pass to the player spacing out to the corner. Timing is crucial and when that player receives the pass the will kick it back to their teammate back at the wing area. They will then follow the pass into a screen and then pop to the elbow where the Dish will make another pass for the shot. The offensive player coming off of the screen with take a dribble and knock down the mid-range shot. Once again the players need to keep their spacing and make sure the timing in this drill is correct so that come game time these shots will be available.

In the third drill we worked on the same action in drill 2, but this time the offensive player coming off of the screen will make the pass back to the player popping to the elbow. After they do that, they will receive a pass from the Dish for the short corner shot. Coach Lee again reiterates the importance of simulating where the defenders may be so that the passes are accurate and game-like. If players are going through the motion and making sloppy passes and not spacing accordingly, those same bad habits will translate to the game. Coaches set goals on the Dish so that your players are forced to reach those goals and push themselves to do better each time!

We really appreciate Mike Lee from Thrive 3 Basketball coming to the Dish Lab to put in some work. For more great workouts and basketball drills, be sure to subscribe to our YouTube channel and see how Dr. Dish shooting machines can help take your game or program to the next level!

As always, remember to train hard, train smart, and train with a purpose. Let's get it, baby!

Ready to upgrade to Dr. Dish? See how George Mason is staying accountable with their Dr. Dish All-Star machines!