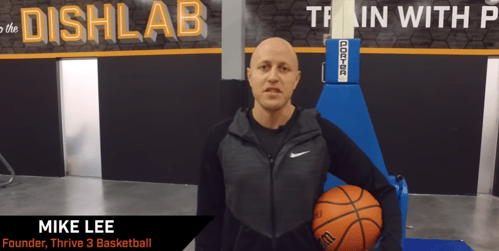 We were thrilled at Dr. Dish Basketball to have Skills Trainer Mike Lee of Thrive 3 Basketball come into the Dish Lab to go through some excellent drive and kick drills!

Being able to master all the options of the drive and kick will open up the floor for all players. Attacking the hoop and kicking out gets the defense moving and rotating which is always a good thing on the offensive end of the floor. Take a look at the video below and see how doing these 4 drive and kick drills on your Dr. Dish Shooting machine can benefit your team and also you as a player.

In the first drive and kick drill, Coach Lee focused on driving to the elbow for the kick out shot. You can start this drill in a few different ways by either starting in the triple threat position or attacking with a quick move. You want to take a direct route to the elbow to suck in the defense and then kick out to the open teammate for a shot.

Players, it's important to make sure that you aren't just running to spots. You want to play the game and make sure that you flow with what the defense gives you. The worst thing you can do is just go through the motion of the drill because you won't get better and it will not be game-like.

In the next part of this drill, Coach Lee is focusing on the offensive player driving into the gap and then kicking the basketball out into another baseline drive. After the baseline drive, the player who started the drill will relocate back out to the free throw line and shift to the corner so that the player driving to the hoop can pivot back and make a pass to that player for a shot.

In this second drill, the players are working on the hard drive to the basket with a kick out followed by a baseline 3 point line relocation from the player that first drove the basketball. The player receiving the pass will drive hard baseline then kick the basketball back out to the player relocating for a shot.

The next part of this drill starts off the exact same way as the first but instead of the player relocating towards the baseline for the shot, the player will relocate up the 3 point line for the open shot. Usually this will happen if the defender is late to help and stop the initial drive. If the offensive player shifts towards the baseline, the defender can recover easier and the pass is a tough one to make.

3. DRIVE AND KICK-RELOCATE UP THE LINE

In this third drill, the offensive player will drive hard to the hoop and reverse pivot back to make a pass to the offensive player relocating from the corner. This is a quick scoring option and once again a read that an offensive player must make. The shooter has to relocate up the line for the open shot. If you have multiple players it's great to have some defenders switching in and out to make it more game-like and realistic.

The last drill Coach Lee demonstrated was the drive middle, kick out into another drive to the hoop. The player that drives the second time will kick the basketball out again, but we are simulating the defender riding the offensive players hip on defense. The pass needs to be an over the head or a wrap around pass to get it by the defender successfully. Once again you can't play the drill but simulate live action so that players can make proper reads when game time comes.

All of these basketball shooting drills are looks that players will see on a continual base. It's important to be proficient with the drive and kick because it will open up your offense and its a quick way to break off any play to create opportunity for yourself or a teammate to score.

Be sure to focus on your fundamentals and incorporate the concepts your coaches may have. And in everything you do make sure to train hard, train smart, and train with a purpose!