Basketball Tips: 3 Keys to Blowing Past Your Defender 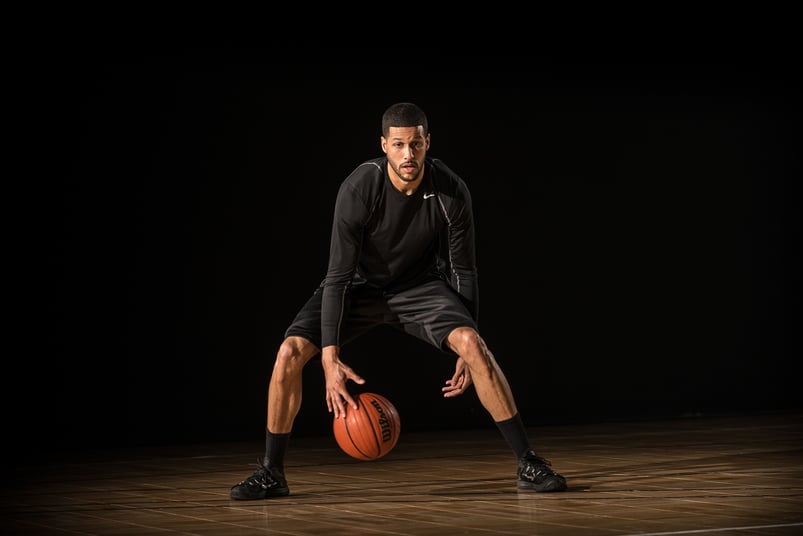 Dr. Dish Basketball is back at it with 3 great ways to blow past your defender.

Every player is looking and searching for ways to create scoring opportunities for themselves and also teammates. Most players think that they need to have an advanced double or triple move to blow past a defender but most of the time a quick move paired with properly reading the defender is enough.

The game of basketball is extremely fast moving and players on the offensive and defensive side of the floor must make quick decisions when the game is in action. This is why developing great habits is extremely important and will help players naturally make great split second decisions on the court.

The more comfortable a player gets at the level they are playing at, the slower the game becomes. This doesn't actually mean the game slows down but it does become easier for players to settle in rather then run around aimlessly because of excitement or fear.

Players: Please make sure you are playing and thinking the game with pace. At times you will need to play and think fast and sometimes you need to slow down and allow a play to develop. Understanding the difference is the beginning step in being able to blow past your defender.

One of the most important things defenders are taught is how to close out and to stay on the balls of their feet. The reason this is so important is because great offensive players know how to destroy a player whose close-out is suspect.

Many times you will see defenders shading towards the weak hand because they don't believe offensive players are skilled or athletic enough to attack that way. This is why it's very beneficial to have the skill set to go either way. When the defender shades one way, sweep and attack that way to force them to cut you off. If you go straight to the basket with purpose, the defender should have no chance to stop you getting to the rim without fouling. If they are able to cut you off, the side step, euro step, or spin move is a great way to slice across the defender for the easy finish.

Another way to take advantage of your defender is to attack their high top foot. When a defender is shading one direction that doesn't mean you have to go that way every time. Attacking the top foot gives you an opportunity to turn the corner on your defender and also forces them to step backwards before they can slide into position. Once again a quick sweep-and-go is a great way to blow past for a lay-up and a great way to get your defender off balance for a one dribble pull-up. By simply being able to read the subtle differences in your defenders stance and understanding your own strengths, you can create a blow by scoring opportunity.

The next way you can blow past your defender is to utilize change of pace. What players fail to realize is that it's easier to guard someone if they are going the same speed the entire time.

The offensive players that are able to decelerate and slow down then explode to the next spot are the ones that create space for scoring opportunities. When you have the basketball and are in a one on one situation, the goal is to force the defender to make a mistake or hesitate.

One great way to do this is simply attack the defender and force them to get on your hip or shoulder. When this happens decelerate and slow down. This will cause the defender to also decelerate and get out of position. Follow that with an explosion towards the scoring location you want to get to. A lot of times the subtle change in pace will get a defender to stand up or get out of their defensive stance. This minor change will give you the advantage to blow past your defender and more times than not lead to a scoring opportunity or a foul.

One of the best at doing this is John Wall. While he is incredibly quick and fast, one of the reasons he's so successful is because of his change of pace.

Utilizing downhill momentum is one of the best ways to put your defender in a compromising situation and ultimately blow past them. Downhill momentum opportunities can come from many different situations during the game including the fast break or even the secondary break. If you're able to catch the ball on the move, make sure to utilize that momentum to attack the defense. It's much tougher to blow past your defender when standing still and/or flatfooted.

It's great to use quick changes of direction in the fast break because defenders are often moving backwards at a fast speed and it's extremely difficult to slide over at the same time. Often times you'll see players like LeBron James and Russell Westbrook actually retreat dribble backwards away from their defender. Then you'll see them go straight at the defender downhill using a quick move to blow past them. In this situation, usually the defender will have to guess which direction you're attacking.

If you can read the defenders footing properly, it will almost be impossible for them to stop you as you create downhill momentum. There will almost always need to be a second line defender there to help. If this happens you've done your job and created an open opportunity for another teammate to score.

These three expert ways to blow past your defender can be easily implemented into any player's game because they don't require a player to be overly athletic, quick, and strong. These opportunities come from thinking the game through and understanding the situations the game and your defender gives you. Players like James Harden have mastered these blow past techniques and that's why he scores so effortlessly and draws so many fouls. He's obviously an unbelievably talented player, but players at the high school level can master these techniques as well.

For great workouts and basketball drills to work on your offensive game, be sure to visit and subscribe to our YouTube page and check out this page. Knowledge is power and this leads to success so make sure to always train hard, train smart and train with a purpose!