Lindsay knew that her old high school would benefit greatly from having 2 Dr. Dish All-Star machines in their gym. The 3-time WNBA Champion also said that she didn't have this type of basketball training equipment when she was growing up, so she felt it would be an amazing thing to do for the players there.

I was fortunate enough to speak to the kids about the importance of training hard and efficiently. I briefly went over some of the capabilities their new shooting machines would provide for them and how they could maximize their training using it. It was great to see the excitement on their faces and I know they truly appreciate having these shooting machines in their program.

We were also joined by the Wolves/Lynx Academy and with their help, we had an amazing 1 hour clinic that involved games, shooting, and competitions. We had two stations in which the players were doing basketball drills on their new Dr. Dish All-Stars. The first station was a team shooting drill in which players drove to the lane for a kick out into a baseline drive for a corner three point shot. In the other station across the gym, the Dish was pulled away from the basket to make game location passes near the elbow area.

One thing that Lindsay loved about our shooting machines was the ability to pull it away from the basket and use it in a variety of different ways. She went on to explain that the All-Star is capable of delivering game location passes that would be realistic to an actual game scenario. She also spoke about incorporating the post players on the team by swiveling the net system around and being able to receive passes in the post area. 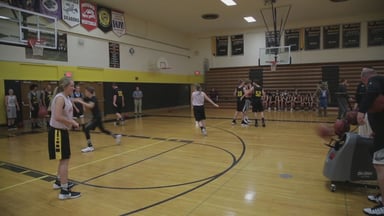 In this station, we were able to work on some mid-range jump shots with the Dish. The coaches were able to be hands on because they didn't have to worry about making passes themselves. As a former professional player myself, I was never able to train in the post with a traditional shooting machine. It was strictly shooting, but I was a player that also mixed it up down low with the big fellas. The only way I could train in the post realistically was if I had several coaches present to make passes and what not. If I would have had the Dr. Dish All-Star, then I would have been able to train at game speed, in the post area all by myself! Overall the donation and clinic went extremely well and the kids had an absolute blast!

Once again we want to thank Lindsay Whalen and the Minnesota Lynx for helping make this day possible. We know that the Dr. Dish All-Star shooting machines will help the coaching staff and the players alike. Be sure to subscribe to our blog post as we have more exciting news coming soon! And as usual, remember to train hard, train smart and train with a purpose!

See why BYU's choice of Dr. Dish was a no-brainer!