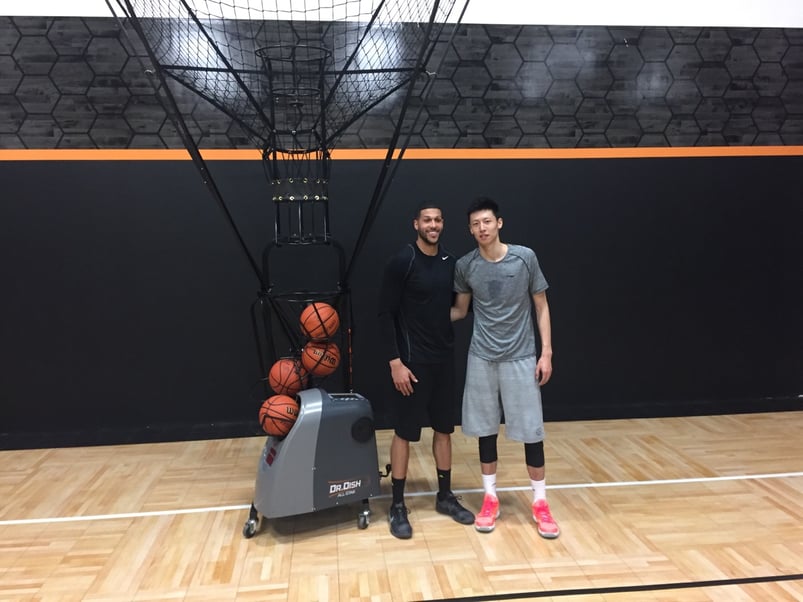 Dr. Dish Basketball was thrilled to have professional player Yanhao Zhao fly in from China to get some skills training in at the Dish Lab! Yanhao has been touted as one of the best young and upcoming talents from China. His countrymen have tagged him as the "Steph Curry" of China because of his exciting play and shooting ability. Yanhao, like other professional players, is continually looking for an edge over his competition. He wanted to utilize our shooting machines to take his game to the next level and put some work in at the Dish Lab.

In the 3 weeks we spent training, Yanhao was able to really focus on the small things that make a player great. He already possesses the athleticism and size and he also has a great feel for the game, so the goal was to fine critique and adjust several things. We were able to track his progress statistically in every workout and we could see the increase or dip in percentages depending on the basketball drills we were doing. This really gave Yanhao a clear view on where he was at all times and also motivated him each time he stepped into the Dish Lab. Check out the video below to see a recap of all the skills and drills we worked on together with Dr. Dish!

One thing that Yanhao stressed he wanted to work on was quick individual moves to the basket finishing through contact. He wanted to get used to finishing strong and also finishing over the top of taller defenders. We wanted to make sure that we could coach and also physically show him what we wanted him to do, so it was crucial for us to have the Dr. Dish All-Star shooting machine on hand. The All-Star is the only machine in the world designed with its swivel net technology to train post play, make game location passes and also allow for players to work on finishing at the hoop like we did with Yanhao. We moved the Dish to the wing three-point line and set the tempo to keep making passes to Yanhao at the free throw and elbow areas. From there he would make a read then move based on the defense we played on him, and then he would finish at the hoop in a multitude of ways. Without the Dish, we would have had to keep passing him the ball and our ability to mix it up with him and coach him directly would have dramatically decreased. We also set a goal to do each drill for 10 minutes. This was to encourage him to work through the drill even if he was tired and missing shots. We made sure to switch sides and angles we entered the ball to once again train game-like!

Overall Yanhao did an amazing job and shot the ball incredibly well throughout all his workouts. We want to thank him, his agent, and translator for coming to the Dish Lab this summer. Pro players, colleges and high schools around the world are excited about this amazing training machine and we can see the success it continues to bring to teams all around the world!

For more information on our shooting machines, please visit our website or give us a call at 952-873-2633. And like we always say, make sure to train hard, train smart, and train with a purpose!

Are you ready to upgrade your shooting machine? Here are 4 common problems with your outdated machine!