Basketball Practice Plan: How to Fully Utilize Your Shooting Machine During the Season

We're at the point where nearly every basketball coach, player, and trainer has either used a basketball shooting machine or at least has seen or heard of them. But we still encounter many players and teams that aren't fully utilizing their shooting machines to their maximum potential throughout the year.

We also hear from many coaches:

"We don't really use our shooting machine during the season."

While we understand that offensive and defensive philosophy, scouting reports, special situations, etc., are all very important in your basketball practice plan, it's also essential to keep your players' shots fresh and muscle memory locked in during the season.

Shooting machines can and should be utilized year-round and especially before/during/after practice! Unless your program has unlimited managers or rebounders, there's no other more efficient way to train at a high repetition level.

Here are 3 keys to keep in mind when incorporating your shooting machine into your basketball practice plan.

With any basketball shooting drills you run in practice, you should ask yourself:

"Does this correlate to anything we run in our offense?"

Many times basketball coaches will have great shooting drills that get plenty of reps, but the shots aren't necessarily a focal point in their offensive system. For example, simple catch and shoot drills from under the basket are great to warm up, but ultimately shooting workouts should be as game-like as possible.

For example, if you run a lot of downscreens in your offense, think of ways to simulate that specific action within your shooting drills. One easy way to do this is by having your shooting machine kick a pass the the top of the key. The player that catches the ball from the machine then passes to a player simulating the downscreen action for a jumpshot on the wing. There are a bunch of different variations to this, but by practicing at game speed and using game-like footwork, you will be better preparing your players for game situations.

Think of where and how your players get their shots in games and design your shooting drills around those actions. In nearly every one of those situations, Dr. Dish will be able to help. See how St. Mary's University (MN) is using Dr. Dish for Game-Like Training!

2. Train the Inside Game Too

Most basketball drills on shooting machines are designed primarily for perimeter shooting. One of my biggest pet peeves is watching a post player who never takes any shots outside of 15 feet in a game, but consistently chucks up 3 pointers on the shooting machine during practice. With the Dr. Dish All-Star, you can work the outside and inside game. With our patented swivel-net technology, the machine is no longer confined to under the basket!

For example, it doesn't make much sense to run "floppy action" shooting drills for post players that never come off those screens in a game. With the Dr. Dish All-Star you can now feed the high-post, mid-post, low-post to train the inside game as well.

This feature is HUGE for working on finishing around the basket as well! With essentially every other shooting machine on the market, including the Rebel and Pro, it's very difficult to work on game-like finishing moves with the net system in the way. With the All-Star, you can receive an actual game location pass and also work on every finishing move imaginable. Think of how much of a competitive advantage you can gain by training like this throughout the season! See game-like shooting drills on the Dr. Dish All-Star here.

Developing a basketball practice plan during the season is difficult when it comes to managing the overall intensity of the practice. At different times of the season and depending on when the next game is determines how hard coaches should be pushing your players. With Dr. Dish Smart Machines (Pro & All-Star), coaches can track the heart-rate of each individual player as they work out on the shooting machine. There is also a setting where you can keep a player in a specific heart-rate zone (i.e. 70% of their max heart-rate). The machine will actually slow down or speed up in correlation to the player intensity. 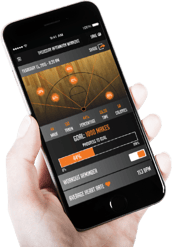 With this information and data, you can now push players to work at game speed AND prevent them from working too hard before or after a game. While it's obviously important to train under game-like conditions, it's also essential to manage the work load of your players to make sure they aren't putting themselves at risk of getting injured or not being 100% fresh going into a game.

It's also essential to track progress of specific shooting drills throughout the season to show improvement and increase player motivation. With the integrated Dr. Dish app, you can keep track of each player training individually on the machine as well as setting team/individual goals. Not only is this data valuable for accountabililty purposes, coaches can now use the data to make smarter coaching decisions during games! Check out how NDSU Men's Basketball is using Dr. Dish for this reason.

Everyone can use a little extra inspiration when they're training or practicing. By streaming music through the optional JBL speaker of Dr. Dish, it can actually increase endurance by up to 15%! The speaker system seamlessly connects via bluetooth technology and can stream any playlist for your team to get them pumped up during their workout.

If you have a shooting machine and aren't using it before, during, and after practice, it's time to step up your training game! And if it's not a Dr. Dish machine, you're missing out on a ton of capabilities that can help you win more games. Between the increased reps, ability to train all players, and powerful analytics to make coaching decisions, there's no doubt that Dr. Dish shooting machines can help enhance in-season practices.

See why BYU's choice of Dr. Dish was a No Brainer